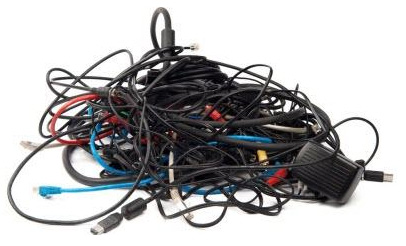 Right now, you could be any one of these connectors on your PC’s monitor: VGA, DVI, HDMI, DisplayPort, or USB-C.

The VGA connector is the oldest and only carries an analog signal. This connector is still around though on both some new PCs and Servers. VGA should not be used (and can’t be) on newer high resolution displays. For servers though, VGA is still the king. Most servers running in a data center operate headless with no monitor attached at all. If they do have a monitor it is usually either for initial temporary setup or connected to a KVM switch in small data cabinets. Really, any decent server should offer some type of built in network console like IPMI, eliminating the need for a display connection at all.

DVI came after VGA and offered a digital output. For many years, DVI was the best option for a crisp picture with no analog distortion. DVI is great for any screen up to 1080p. Beyond that, and you will have to sacrifice refresh rate for more pixels. This is still a great option for most displays up to 1080p but its days are numbered.

With the advent of HD televisions, HDMI quickly became the standard for delivering digital video and multi-channel audio through a single, small cable. HDMI 2.0 can support 4K displays at 60 Hz. The standard connector is smaller than DVI and HDMI cables are ubiquitous  and cheap. Finally, one standard that works for TVs and computer displays! Or was it…

This son-of-a-bitch had to come along and ruin everything. DisplayPort is a better technology. I’ll give it that. It uses packets (similar to Ethernet) to send data and that means you can run multiple displays off of one cable. Neat! But, the vast majority of PCs will never use any feature of DisplayPort that HDMI could not accomplish. But, since DisplayPort presents yet another connector to split the vote in the connector arena, we end up with PCs, video cards, and monitors with an array of connectors and still, we end up having to buy a new, expensive cable or adapter to fit our exact needs. I like the new tech but it causes way more problems than it solves right now. I don’t see this changing anytime soon.

This is another tricky one for me. USB type C connectors are just awesome. The plugs are tiny, reversible, and they are becoming more popular as this standard is used on more phones and devices. This connector is going to be around for a long time and that means USB-C cables are going to be easy to grab when you need one. It’s wonderful. What’s not wonderful is that your USB-C monitor may not work with your USB-C plug. USB-C monitors made for PCs actually just use the DisplayPort protocol over a USB-C plug. If your USB-C port on your PC does not also support “alt mode” your monitor will not work. If you have a MAC you will have a USB-C plug for your monitor powered not by USB or DisplayPort, but a completely different and incompatible protocol called Thunderbolt™. At least the plugs are the same and as long as you have plenty of good quality USB-C cables, you are less likely to have to run to the store… Until the next standard gets forced upon us.