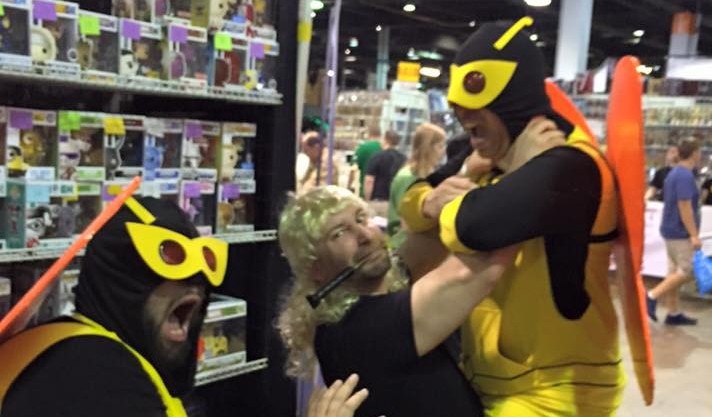 My first Comic Con! I had to work in Chicago last weekend and my girlfriend was able to tag along with me! The whole weekend was wonderful and Saturday was our day for con activities. There were literally 1000s of people there. Once we finally got the the con, we were taken aback by how much stuff there was there. The majority of the con is vendors selling stuff but they also have programming you can attend. The programming was pretty obscure and I didn’t find much I was interested in. I see all of these videos from San Diego Comic Con and I can see it is on a whole other level from this affair in Chicago.

There is another con in Chicago called C2E2 and from what I can see on the Internet, it is a better option. While I was in Chicago in April this year it was going on and I went to one of the after parties at a bar and had a pretty great time. I will look into that next year.

There was a freeplay arcade setup there and I got to play Altered Beast. I used to play that as a kid at a local watering hole and then on our family SEGA Genesis. That was really cool to relive.

This con had an official after party that we went to and danced our asses off among Jedi’s, starship captains, robots, and superheros. We stayed out late dancing with the nerds brave enough to show up to a dance party and it was well worth the effort.